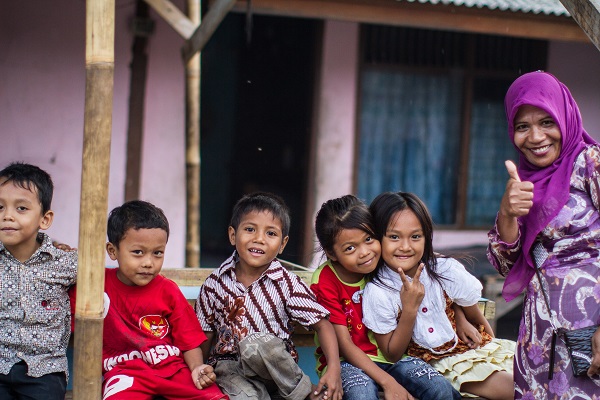 FEBC Indonesia develops specific content for radio programs that provides training for parents who then have a direct impact upon the children, youth and young people. It currently broadcasts programs across the seven cities of the radio network.

Below are some specific impacts from different areas where face-to-face training has been implemented in follow up to the content aired on Senyum Indonesiaku:

Bandung. As a result of listening to the radio content, a parent asked FEBC to conduct training in Bandung City for their teenegers so they know how precious they are, and help them how to have a vision and be confident in finding their voice. 30 teenegers attended with reports of improved confidence and communication.

Tangerang. FEBC facilitated a seminar for listeners ‘How to communicate with the millenial generation,’ attended by 70 parents. Another seminar on ‘Growing a child with good quality and character’ was attended by 40 Mothers. As a result of attending, they realised the importance of communities working together.

Jakarta. FEBC training helped parents with budgeting and money management. 40 mothers attended and gave feedback as to how they then had improved skills to better manage the financial resources they have, and to educate their children. FEBC also partnered with the Immanuel Medical team as part of a health and hygiene promotion, serving children, parents and communities living in the slums. More than 200 childrens and 100 parents were served at that time.

Cibubur. FEBC hosts a drawing and colouring competition for kids between 5 – 12 years old. It allows trainers to have interaction with the kids to verify health and wellness and measure the impact of the radio content program. FEBC also conducts workshops on ‘Personal Business Development’ to help young generations have understanding and skills in start up business.

Padang Pariaman. FEBC partnered with kindergarten schools in the Batang Anai District to educate about child protection and teach parents about health and hygiene. 109 children and 93 adults attended. It resulted in greater engagement between parents and community groups, with more awareness about child protection.