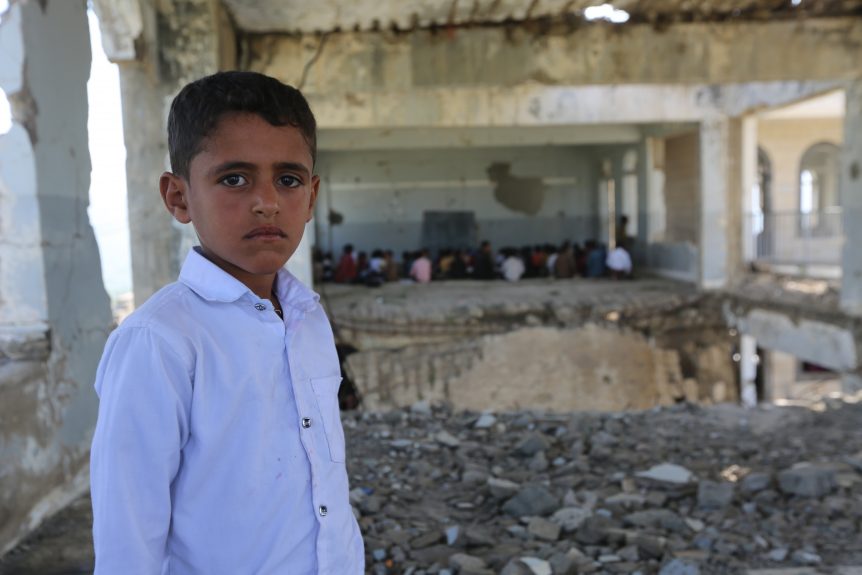 Afraid. Grieving. Depressed. That is how more than half of Yemeni children are feeling, with more than one in five feeling this constantly. A far cry from the nation it once was in Biblical times, when it was under the rule of the Queen of Sheba. The country desperately needs the peace and hope that Jesus came to give more than 2000 years ago.

Civil wars in Yemen have ravaged the country for six long years, with no signs of abating. More than four million people have been uprooted from their homes. Airstrikes have destroyed healthcare and water and sanitation facilities. Cholera broke out, with over two million Yemenis infected, and thousands of deaths. The United Nations has labelled this as the largest humanitarian crisis in the world.

COVID has further aggravated the crisis. Fuel imports have reduced, pushing food and transport prices beyond the reach of many Yemenis. Nearly half of the population do not have enough to eat. UNICEF states 11 million children are at risk of malnourishment.  21 million Yemenis are in dire need of humanitarian assistance, and any trickle of hope.

In the midst of this prolonged oppressive darkness, FEBC partners in Yemen have been shining the light of Christ, seeking to nourish hearts famished of all hope, and giving practical support. Programmes on shortwave radio tackle the real problems that the Yemeni community face. Follow-ups on Facebook and social messaging provide the human touch. Biblical perspectives are introduced through teachings, such as on the parables of Jesus and the sermon on the mount. Presenters also encourage listeners to call in and respond in a segment called “Hot Issues”.

Today, an estimated 200,000 Yemenis listen to the programmes, though the number is likely to be significantly more as many listen in secret. Yemen is the 7th most dangerous place in the world to be a Christian. Leaving Islam is forbidden and may draw a death penalty. Yemeni Christians may also find it harder to receive medical help or emergency aid as these are usually distributed through Islamic leaders or mosques. Our faithful FEBC media partners in Yemen, therefore, have been making practical provisions accessible for the children of Christians in the event that their parents are taken for their faith.

Despite the persecution, dangers and difficulties, the team has received more than 100,000 communications, and nearly 2,000 new contacts. The broadcasts have brought real hope and an assurance of community amidst the increasing isolation of Yemeni Christians. Listener Amat* shares,

“My husband died two years ago. I have two sons and one daughter. I live with my parents. I had many troubles caused by my family and neighbours because I didn’t want to remarry. I began to believe that I am worthless, and that I should only be a slave. I lost my trust in myself and in people around me.

I started to find solace in group chats on the internet, where no one knew me. Three months ago, someone in the chat sent a link and wrote ‘If you want to know who you are and your value, open the link’. I was curious, opened the link and came to your radio website. I was interested to know more about this Yemeni Christian radio and those subjects. I said to myself, ‘I need to see if there are Christian Yemeni people.’

I listened to your programme with your guest, sister Merriam. The way you spoke with each other with respect, and transparency affected me in a positive way. It made me think about my life and values. When you started to talk about old prophets and people such as Deborah and Esther, I felt more and more that I have value. When you both discussed issues, I could feel as if I am at Merriam’s place, that I could trust myself and speak about my own feelings.

Then I contacted you, S, and asked for a Bible. You did all you could, always contacting me in a very careful way because you knew about my sensitive situation, and you always answered my questions. Last week I could not reject Jesus anymore. I opened my heart to Christ; I believed in Him. He is my God and Saviour.  Now I know my value – that it comes from God. Jesus opened my eyes. Thank you, because you are my real family now.”