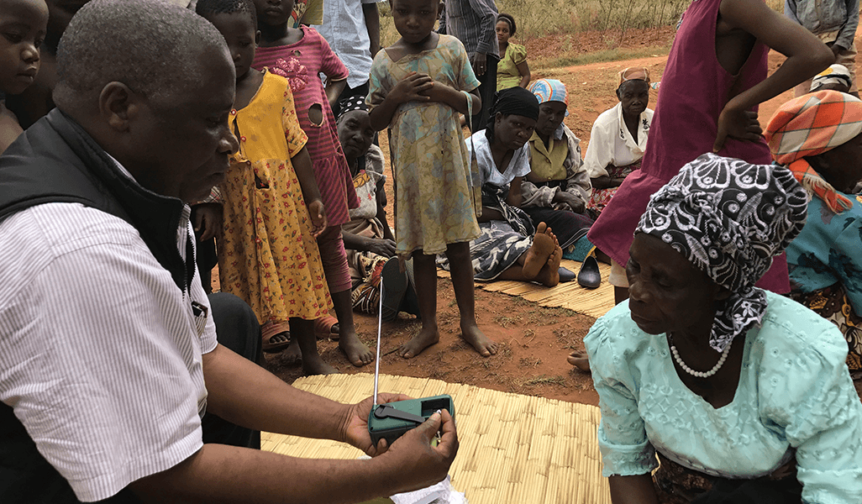 National Director of FEBC Australia, Kevin Keegan, recently returned from a field trip to Malawi where he viewed and evaluated the work being carried out by FEBA Malawi, with a view to expanding our project portfolio and to engage with supporters in Australia with a heart for Africa.

Kevin met with Rev. Amos Siyabu Phiri, who leads the ministry in Malawi, and was also joined by the Chairman of the FEBA Malawi Board. After hiring a small four wheel drive, they travelled into rural Malawi to meet with organised listener group meetings. Over three days they travelled some 700 kilometres on tracks and through rivers – without a tarred road in sight.

Amos explained there are over 850 listener clubs throughout Malawi, each with between 15-30 people in each group. Each listener group has a leader, and each area has the equivalent to an area supervisor. The organisation of these groups, which has grown almost organically, is very well structured. Most of the leaders are pastors and there is a very good partnership and synergy with all the churches of various denominations.

Explained Kevin: “The focus of the ministry in Malawi is to the Yao people – a Muslim, hard-to-reach people group – and an area of ministry that well aligns with our priorities in FEBC Australia. It is not an easy thing for these people to commit to following Jesus, and yet many are doing so as a result of their learning about Him. Malawi is extraordinarily poor, with all the rural people basically subsistence living and in these areas Muslims plant Mosques every 5 kilometres and provide bags of Maize to those who follow Islam. Yet despite their poverty, people are choosing to follow Jesus instead.”

The radio ministry communicates the good news and relates to the issues of the people, and as a result it is having a powerful impact on the people of Malawi. It is well supported by the equal distribution of ‘talking Bibles’ when radios are given out. In fact the voice on the talking Bible is that of Amos, who did all the recording and translation from his small home studio – thus they know the man on the radio as the one who brings them the Bible.

“During one of our visits at a village where over 12 listener clubs had joined together, three women indicated that they would like to be baptised. What a privilege to share in that, as together, singing along the way in full African style, we walked to a grey water hole. To be baptised is a huge step and one that can cast people away from their Muslim families, and yet these women, along with many others, took this step of following Jesus,” said Kevin.

During their visits across seven locations, they we met with almost 1,000 people: under trees, in broken down buildings, in grassy paddocks, or beside a grey waterhole.
“In every place we were privileged to hear testimonies (through translation) from men and women, young adults, previous Muslim leaders and blind listeners whose lives had been transformed,” said Kevin.