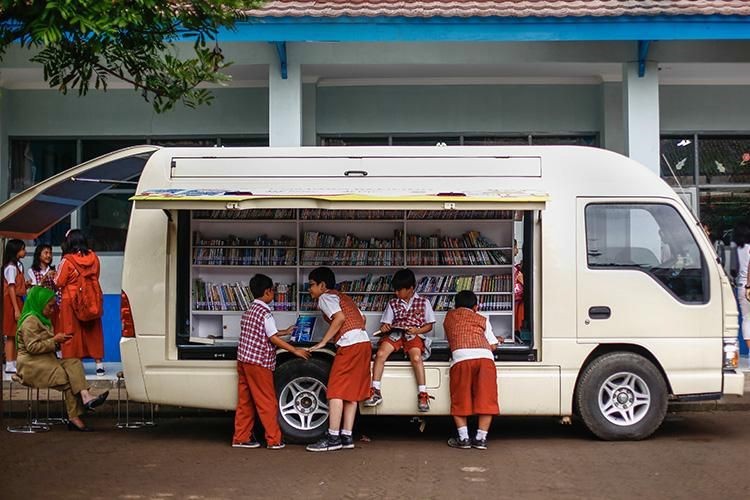 “Refugees have skills, ideas, hopes and dreams… They are also tough, resilient and creative, with the energy and drive to shape their own destinies, given the chance.” So said the UN High Commissioner for Refugees, Filippo Grandi.

The refugees that FEBC works with in Indonesia are marginalised, limited and restricted in accessing education. In a new initiative to reach out ‘on the ground’ – hand in hand with the popular Farsi broadcasts already undertaken – FEBC Indonesia is exploring a mobile library.

Bookmobiles expand the reach of traditional libraries by transporting books to potential readers, providing library services to people in otherwise-underserved locations such as remote areas and/or circumstances, such as residents of refugee community houses.

“Bookmobile services and materials (such as Internet access, large print books, and audio books), may be customised for the locations and populations served. The best thing about a mobile library truck – much like a radio broadcast – is that you are not limited to only one area. The mobile library will allow us to reach more refugees because we can serve them from different locations using the mobile library van,” explained FEBC’s Radio Pars presenter Javad*.

Books will be provided at the door steps of refugee community houses, learning centres and among refugee communities. The home-delivery of books will serve those who are unable to go to libraries for borrowing books.

“The refugee population is rapidly growing in the world as well as Indonesia. Refugees are not considered legal residents in Indonesia and they are not entitled to many basic human rights, including education. By exploring a mobile library strategy we hope to collect and deliver books to refugees around Jakarta and provide self-education opportunities for every refugee,” added Javad*.

It would be the first and only mobile refugee library in Jakarta and will have a focus on girls and women who have never had the chance to access a library and do not have spare money to purchase books.

Power supply is a crucial consideration in mobile libraries, especially in tropical areas. There must be a power supply separate from that generated by the engine. This can be solar panels, batteries, a generator or external source. This allows for lighting for people to read, but also for air conditioning to run.

FEBC Indonesia seeks to raise just under A$10,000 to cover the initial outlay for a vehicle and the first year’s fuel and electricity costs.