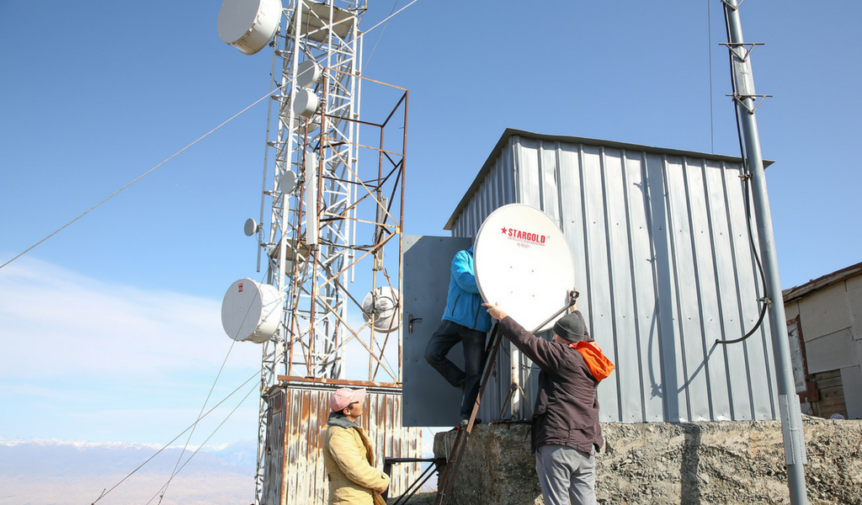 Towards the end of 2016, FEBC launched a repeater station on top of a mountain in Kyrgyzstan just shy of 2500 metres high.

The newest station in Toktogul is closer to some of the major cities in the south of the country, and is an important step towards accessing additional frequencies in these cities. It was the last piece of equipment needed to complete the radio station, which would allow FEBC to proclaim the Gospel for the first time to an estimated 200,000 Kyrgyz people.

Whilst there, members of our FEBC team met with a small group of Christian locals in a nearby town. Theirs is a small, First-Generation church, with only ten members.

Vlad, the leader of the small house church, said, “It’s hard, there is a stigma attached to being an Evangelical Christian here. Because the town was a Soviet town for so long, people were taught in schools not to believe in God, and so most people are atheists. The Soviet ideology was most important, and many people were proud communists here, including my father.”

He went on to say that getting new members to attend their house church is quite difficult, as many find it hard to identify with Christianity. Those who are ethnically Kyrgyz are generally Muslim, and ethnic Russians are often atheists or Orthodox. For many Kyrgyz Muslims, to become a Christian means to be disowned by your family.

As a First-Generation believer, Vlad has very little spiritual training. There are no sermons by pastors in his language, no Christian bookstore around the corner, no pastors in nearby towns that he can ask for guidance, and, until FEBC, no Christian radio stations on the air. He said they needed teaching and Christian material. They were overjoyed to know radio was about to reach them. “We are so excited for the new station in Toktogul. When it goes on the air, we’ll have Christian media here for the very first time,” Vlad said. Imagine being one of those ten individuals sitting around the table, desperately wanting to bring others to Christ and minister to others in the best way they can, but not knowing how or having the resources. Now, for the first time, they have the means to be strengthened in their own faith, while also sharing the radio station with their friends, who aren’t Christians. Praise God for the timely feet upon the mountain in Toktogul.