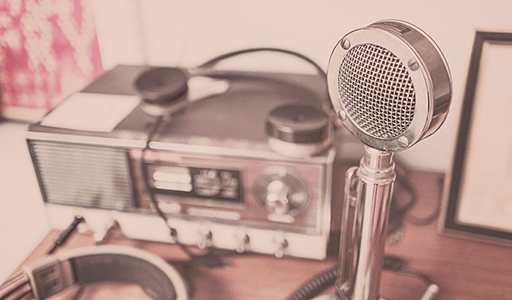 FEBC Indonesia volunteer broadcaster, Javad* has thousands of listeners across the globe. Growing up in Iran, it was his questioning nature that brought him to Christianity. Meeting a Swedish missionary whilst studying an I.T degree in Dubai, he asked: “Do you have a Bible? And does it talk about Muhammad of Islam?”

“Look for yourself,” said the missionary, giving Javad his King James Bible. Javad took it home. He found no mention of Muhammad, even though his High School teachers had told him the prophet of Islam was featured favourably in the Christian Bible. Instead, he found Jesus.

“I could not read the Bible and accept my old religion anymore. I was totally amazed at the difference between Muhammad and Jesus. One of these prophets ordered his followers to attack and kill their enemies. The other ordered his followers to love and forgive.”
In his frustration he turned his back on Islam. He found an underground fellowship in Iran and a pastor who sent him home with his very own Farsi Bible. For the first time in his life he read the Word of God in his heart language

In 2007 Javad was arrested for his underground church activities. He was beaten, warned not to preach or evangelize and then released. Then in 2010 Javad was arrested again. This time he was kept in solitary confinement in a 2×2 metre cell, and beaten badly. After being released on bail and after months recovering in hospital, Javad and his wife decided to flee Iran to Indonesia. It is not a signatory to the 1951 U.N. Convention on refugees, so functions as a point of transit until refugees are resettled by the U.N. in a third country. It can take up to ten years waiting in refugee camps before resettlement.

After finding friends to live with in Jakarta, Javad met the National Director of FEBC Indonesia. He asked: “Would you let me produce my own radio program in the Farsi language? I want to reach out to my people scattered around Indonesia, in the detention centres, prisons and streets.”

Silently but effectively, Jesus Christ is doing wonders among refugees.
Many Iranian and Afghan listeners have been baptised in different locations in Indonesia – including in detention centres – in the past six months. Listener groups are growing – many refugees gather together across towns and cities in Indonesia, as well as refugees in Germany, Turkey, Iran, Afghanistan, Thailand, Malaysia and Northern Australia who tune into the program via digital streaming.

On-air teams take prayer requests and visit those who are in spiritual need. They teach and encourage listeners to build their relationship with Christ. Via radio promotion, FEBC Indonesia teams collect shoes, clothing, toys, furniture and other donated items to support and fulfil the needs of refugee listeners, working with a network of churches in Jakarta to distribute this palpable expression of Christ’s love of the needy.

By day Javad visits detention centres, prisons, and wherever Farsi people gather. The main route for refugees heading for Australia is right through Indonesia, and while many are Iranian, around 90% of Javad’s audience are Afghans.

On a visit to a notorious detention centre where Javad meets with listeners and hands out Farsi Bibles, a fundamentalist approached him. He challenged Javad, “If you love us, bring us the Quran.” The next day Javad returned with ten Qurans and ten Bibles. The findamentalist gathered a group to study the holy books and challenge Javad on his radio programs. After some months, Javad heard from him again, with the news he is now following Jesus!

Yet there is still an incredible opportunity. The growth of Christianity among refugees in Indonesia is spectacular. Partner churches report that Persian refugees may be among the fastest growing church population in Indonesia. Many people are coming to Christ and FEBC’s Radio Pars program is playing a vital role in sharing the gospel and helping disciple new believers. FEBC’s work in Indonesia demonstrates how radio is capable of reaching out across the world’s growing refugee crisis.